Tender Giants – My Experience with the Gorillas of Rwanda 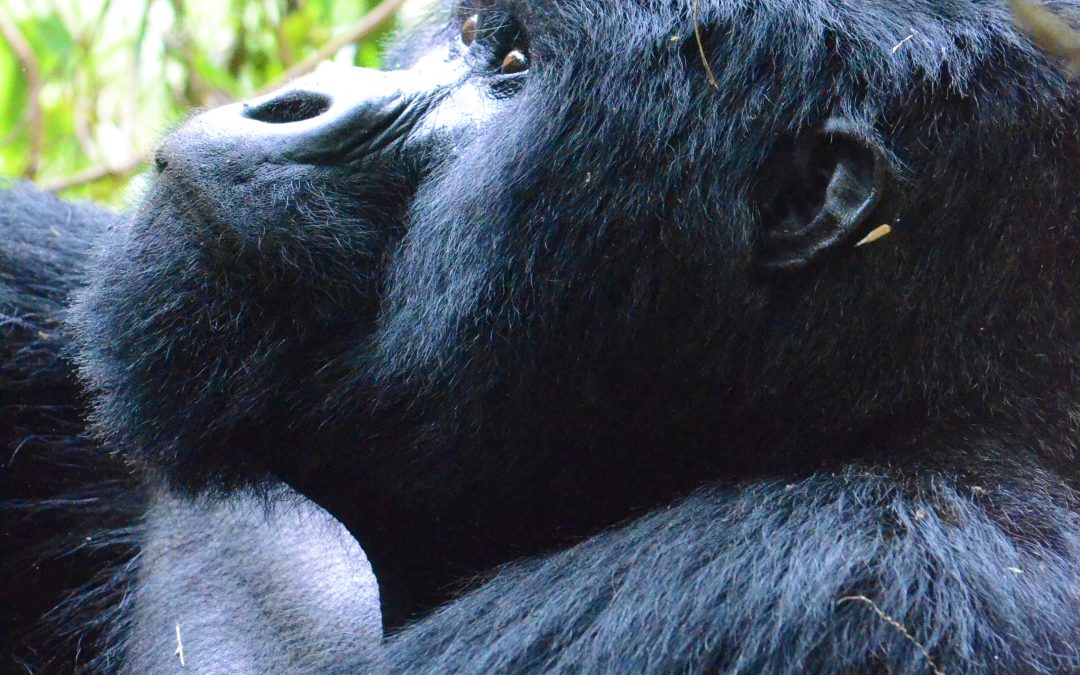 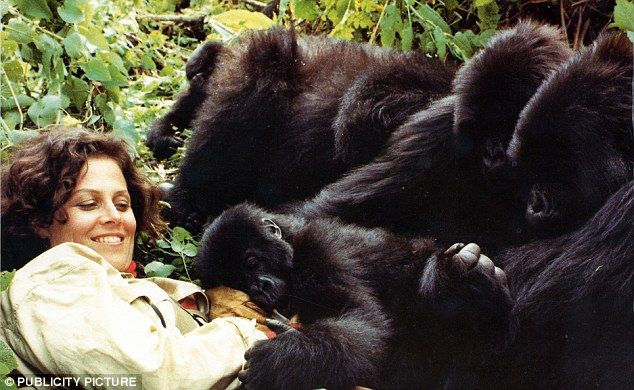 As a child I realized that I had an affinity to animals, especially the rare, endangered kind. After seeing Gorillas in the Mist, the desire to see these gentle giants up close and personal became my mission. Zoos just didn’t do it for me. Somehow I could feel the pain they must be in, trapped behind iron bars, imprisoned for a crime they didn’t commit, jesters for the entertainment of people who knew nothing of their longing to be free. No, I wanted to see them as they were meant to be…in their natural environment, in the countries of Africa.

My chance came when I booked an adventure with 1000 Shades of Green Tour and Safari Company. After some research, I liked the fact that this company and the people they employ were dedicated and fiercely protective of the gentle giants and their environment. They took care of securing a guide, my permits, and transportation and so I was off. 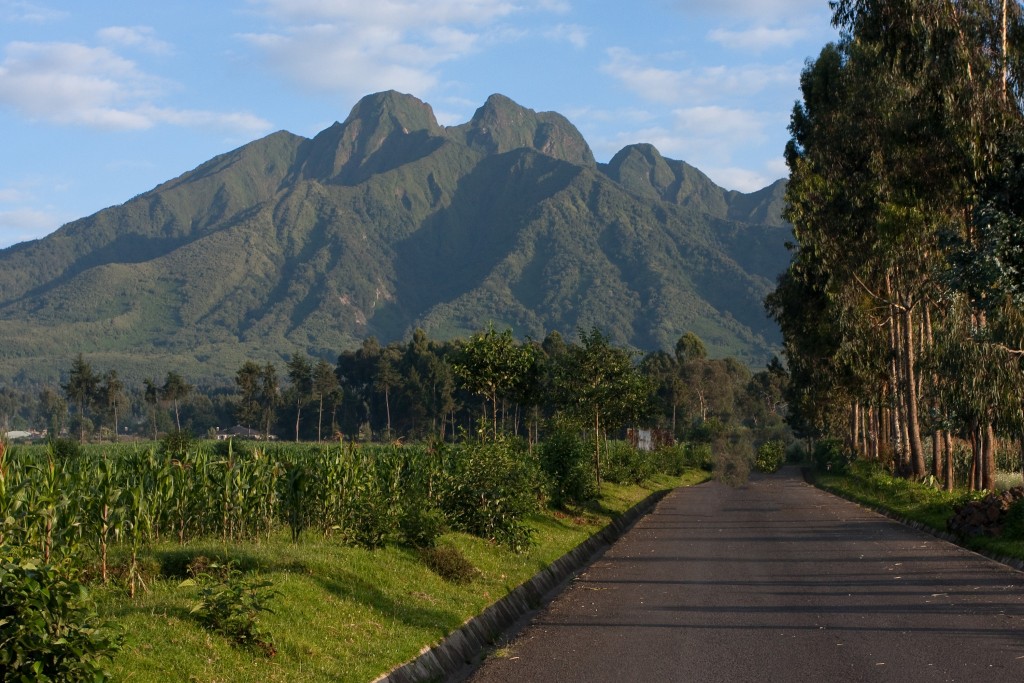 After a long journey from home I arrived in Kigali, Rwanda to my waiting guide, Jackson. Happily, he described what I’d be experiencing and laughed a bit when I told him that I wanted to see lots of baby gorillas. He promised me that he would do what he could to ensure that and I’m happy to say he didn’t disappoint! 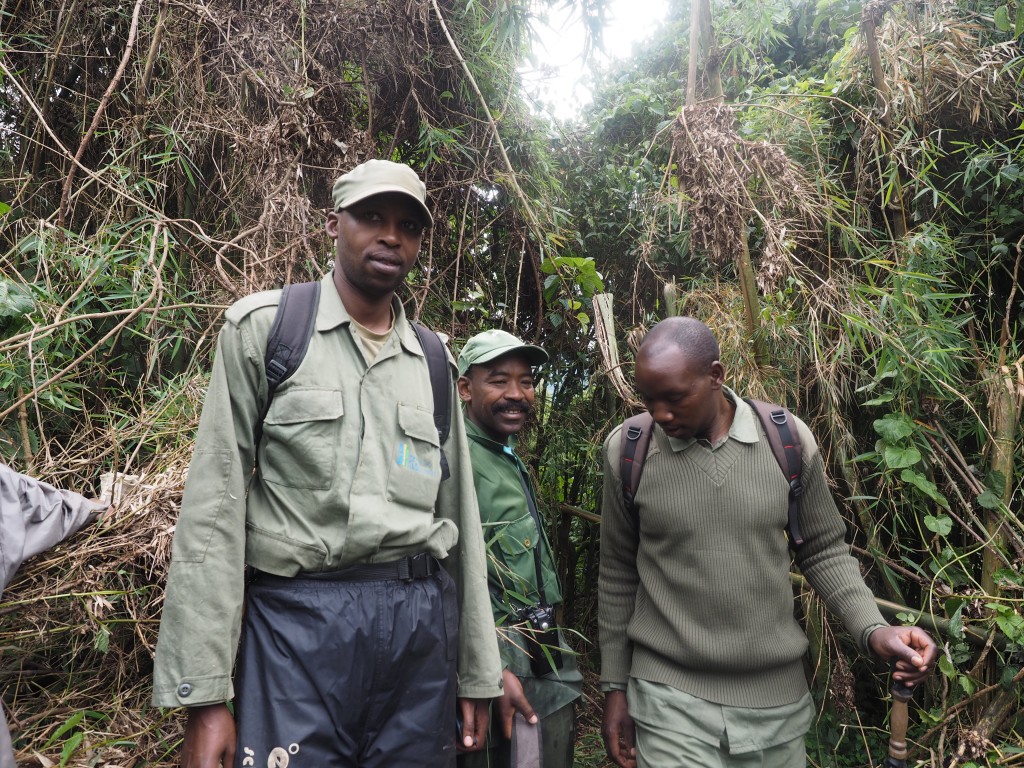 The day had arrived for my trek up the mountains in Volcanoes National Park. I met my guide and the rangers that would lead me to the gorillas. There are several families of gorillas and a small party of 8 people is allowed to visit each one. The guide briefed us on the dos and don’ts of trekking to and visiting with the gorillas. I noticed that the rules were more for the protection of the gorillas than for the people, which thrilled me even further. The people of Rwanda cherish these animals and protect them and their environment passionately. Many of our armed rangers were former poachers but after being educated on the importance of these creatures and their environment they chose to become guardians of the gentle animals. 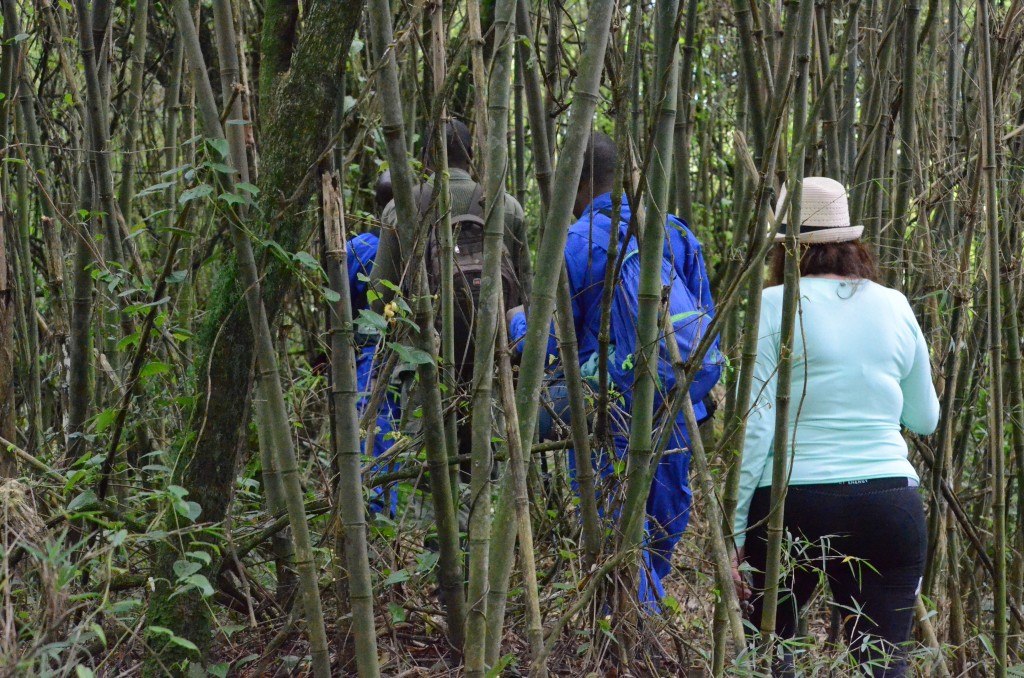 Excitedly our small group set off in search of our gorilla family. I later found out Jackson had inquired to each guide ensuring I would visit the right family who had plenty of babies! He was truly an amazing guide and made my visit to Rwanda a memorable one. 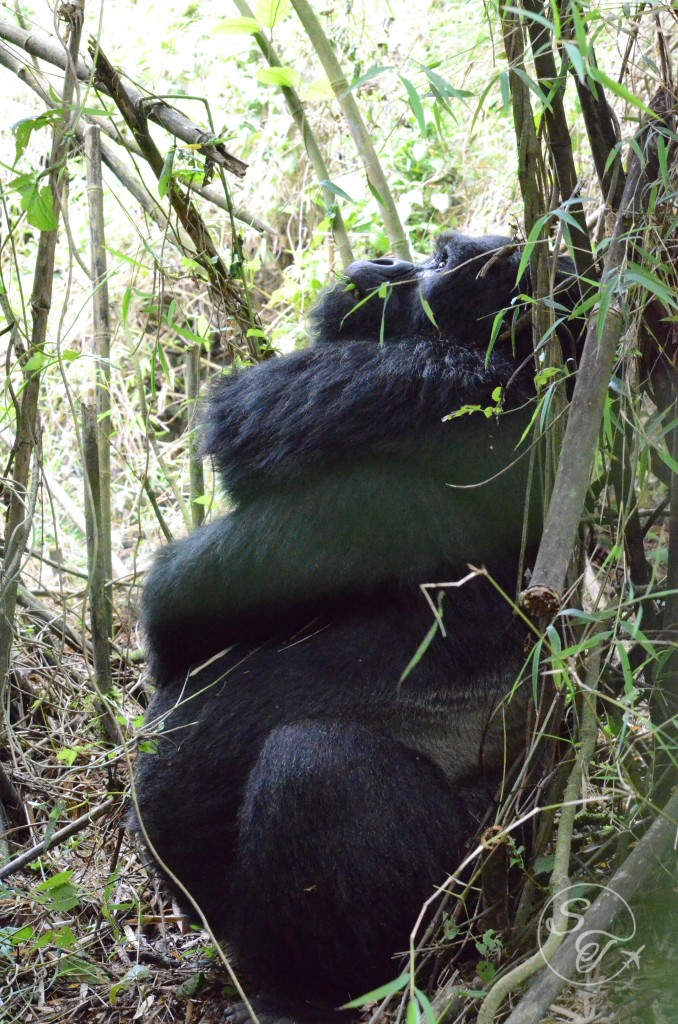 I made sure to follow at the heels of the rangers and before long one turned to us, finger to lips indicating for us to whisper. We came to a small clearing and 10 feet to our right was a massive male sliver back. I was awe struck. You see these creatures in zoos, on television, and in pictures but to see them a few feet away, quietly eating leaves was nothing short of astounding. I immediately cried. Yea, I’m getting sappy in my old age! 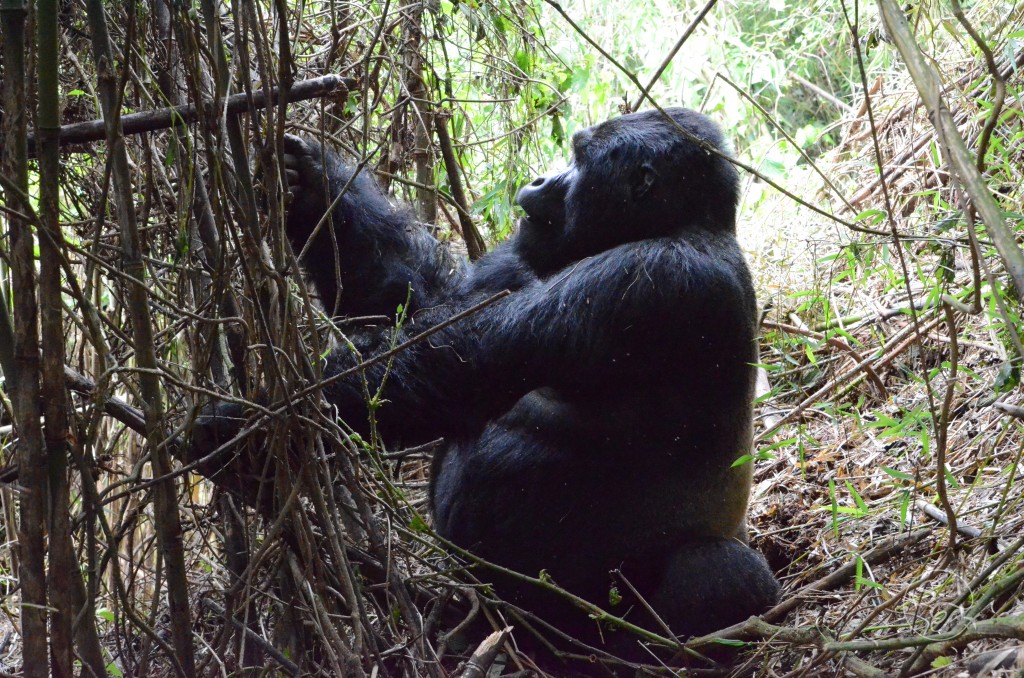 After the initial excitement all 8 of us started shooting off pictures at breakneck speed. This massive animal, which could have easily crushed us with a swat of his arm, simply looked in our direction and continued to eat leaves. His sweet face and gentle demeanor brought tears to my eyes…again. I felt extremely honored to be there, sharing his space. (For more pictures of my awesome visit with these animals click here.) 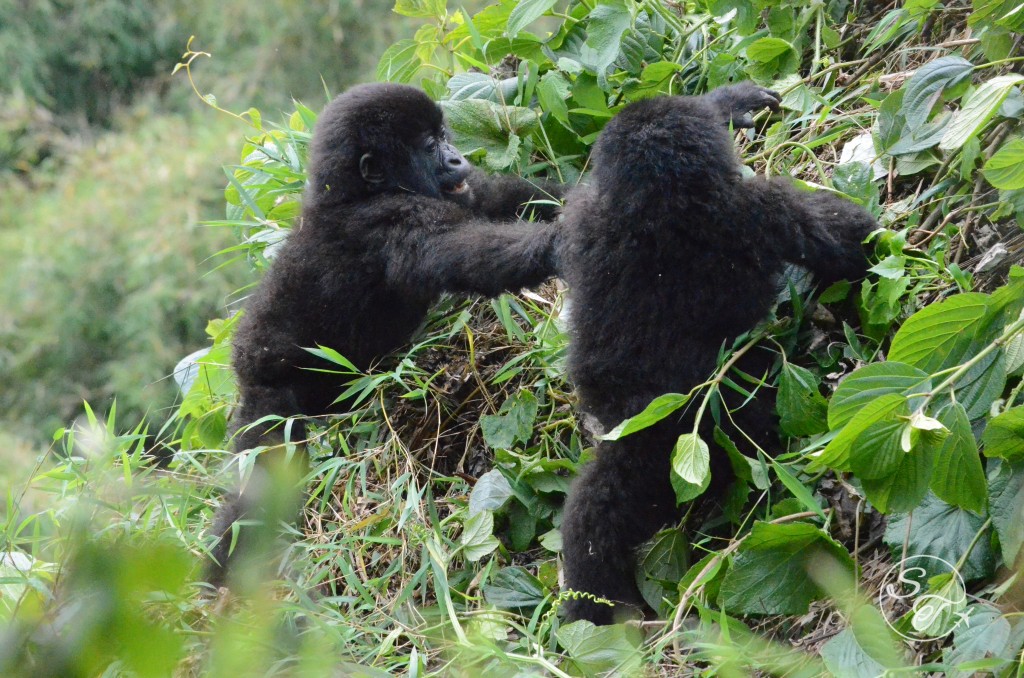 Reluctantly we moved on as another guide had spotted babies. A short distance away we were rewarded with two little ones romping around with each other and rolling up and down the side of a massive patch of vines. It’s clear to see how their DNA is not far off from humans. Those little guys behaved exactly like two human toddlers…one actually teasing and annoying the other! 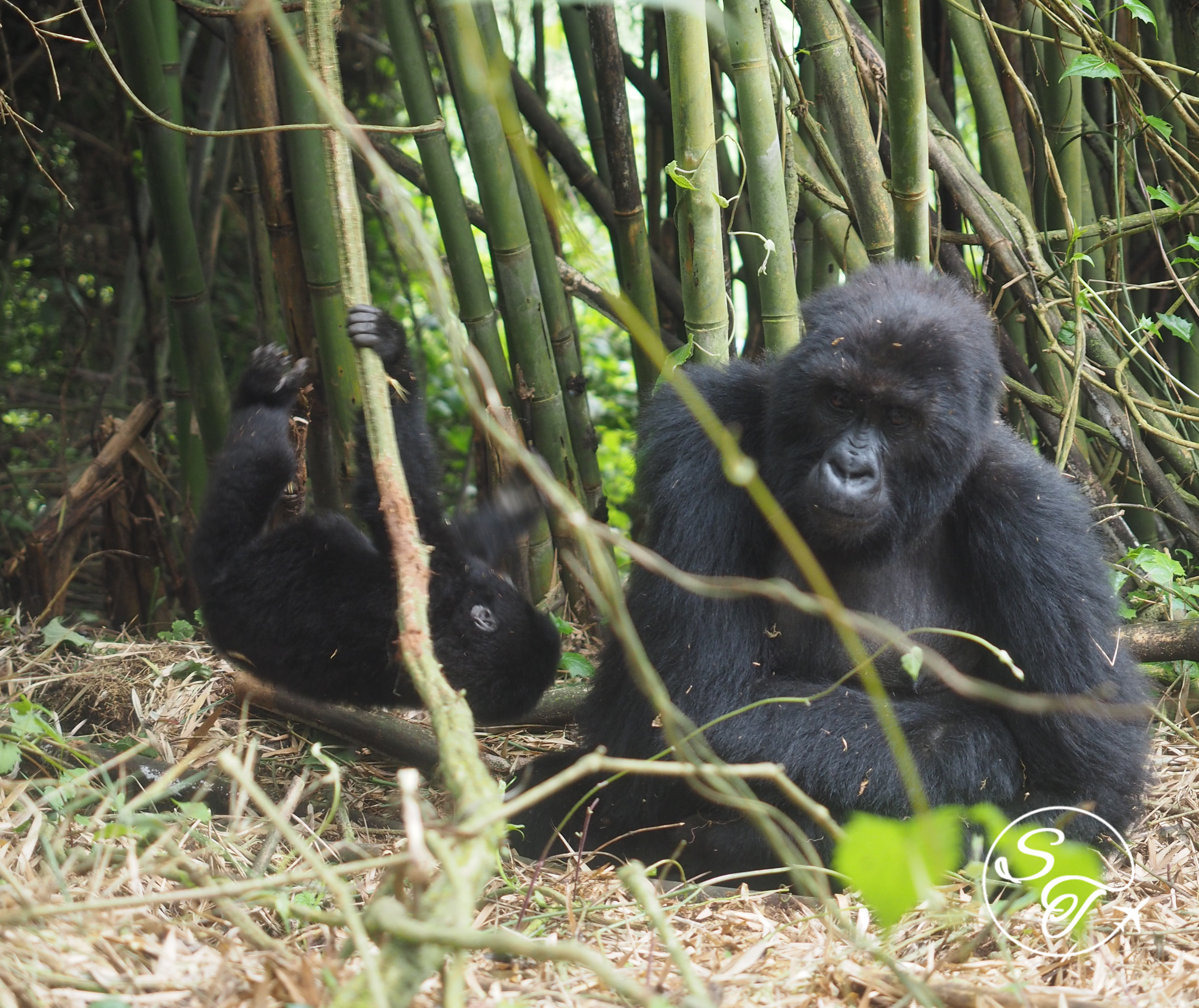 We were thrilled even further when we got to spend time with a very tired mama and her two-month-old little boy. It was exhilarating watching him jump up and down on her and swing from a nearby branch. The poor mother looked as if she could use a bit of rest, but she was attentive and tolerant of her little one. 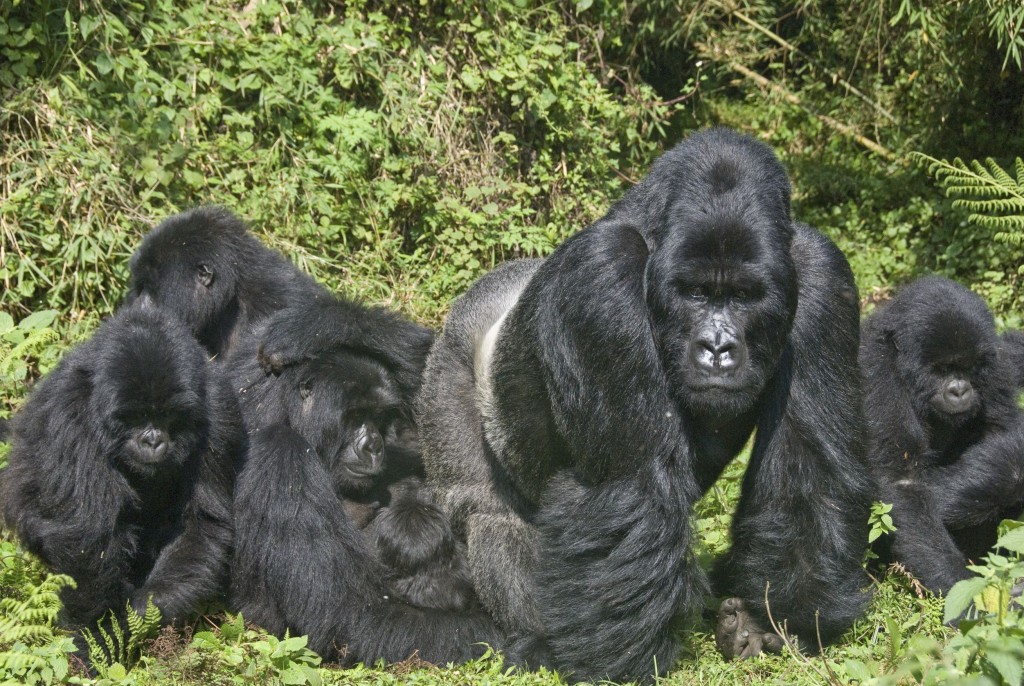 As is often the case, time flew by and we had to leave. Making our way back down the mountain, I couldn’t help but feel a sense of sadness. Not so much that we were leaving but for these animals and the dilemma they face every day. In spite of their protectors they face the danger of extinction, of man infringing on their peaceful lifestyle for greed. I quietly asked the universe for its protection of this beautiful little family and found myself heart sick for their plight.

This trip was one that I will never forget. I had the privilege of seeing animals that I’ve always wanted to in their natural surroundings. I was, if just for a short time, admitted into their family to observe their simple but poignant lives and better understood why they are so intensely protected.

If you have plans to experience this once in a lifetime adventure I would highly recommend 1000 Shades of Green Tours and Safari Company. Not only are they extremely knowledgeable with unmatched service but they do great things with conservation and awareness for Rwanda and her inhabitants, both animal and human, that call her home.

For more information or to book a tour: